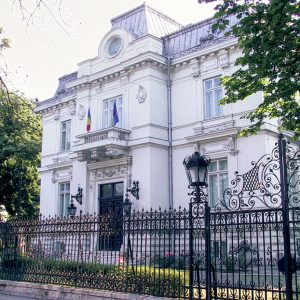 The Art Museum of Ploiesti City has its origins in the Picture Gallery of Ploiesti City, set up in November 1931 as a result of the consistent efforts of an influential group of intellectuals in Ploiesti, among whom the lawyer, politician and art collector Ion Ionescu-Quintus, architect Toma T. Socolescu, historian Dumitru Munteanu-Râmnic, with the help of the local authorities, within the “Nicolae Iorga” Cultural Establishment.

After the Great Union of 1918, numerous measures were taken at a national level to organize a network of specialized museums. Thus, the possessor of a collection of Romanian art from the classic and modern periods and aiming at acquisitions from the contemporary artists of that time, the Picture Gallery of Ploiesti City joined the art museums already existing at the time, among which Brukenthal Museum, the National Picture Gallery, “Theodor Aman” Museum, “Anastase Simu” Museum, “Toma Stelian” Museum, the picture galleries in Cluj and Iaşi etc.

In 1969, the authorities allotted the Art Museum of Ploiesti City its current premises at no. 1, Independenţei Boulevard, the “Ghita Ionescu” Palace which housed, after 1919, the Prefect’s Office of Prahova County. 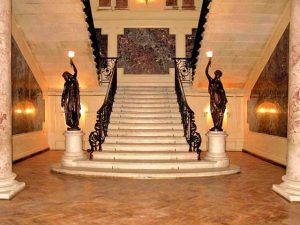 An architectural monument of a national value, enlisted as a historical monument, the building is situated in the centre of Ploiesti City, on the “Chestnut Boulevard” (inaugurated in 1881) and belongs to an architectural reservation bearing the impress of stylistic preoccupations of both Romanian and foreign architects in the last quarter of the 19th century.

The palace was initially a private residence, consisting of a central building and outhouses, situated on large-size precincts, marked by an imposing ironwork fence, which still bears in medallions the initials of its first owner – the politician and banker Ghiţă Ionescu (1833-1898). The latter had his house built and decorated between 1885 and 1894, according to the designs of the Romanian architect Leonida Negrescu, trained at the École des Beaux Arts in Paris and strongly marked by the personality of Charles Garnier (1825-1898), the creator of the Great Opera House in Paris (1861) and the most prominent representative of the Second Empire style.

The building has a solemn exterior, adorned with important pieces of stucco that support the frames of the windows and of the two balconies on the main façade and on the southern side. The roof is high, strewn with French-style chimneys, and initially made of slate scales. The main entrance, surmounted by a gable marked by a large porthole, is staked out by two oversized ironwork lanterns, with decorative motifs in accordance with the fencing.

The interior area is structured onto three levels: semi-basement, ground floor and first floor. Two white marble stairs mark the access ways: the first one, from the courtyard to the main lobby on the ground floor, and the second, much ampler one, from the ground floor to the first floor. The interior decorations are in the Neo Baroque style, with an Italian influence and performance. The columns, the plates inlaid in the walls of the central lobby and on the staircase (made of stucco-marble), the ceilings of the halls on the ground floor and of the central lobby (polychrome and gilt stucco), the lintels above the ground floor doors and column capitals (gilt stucco of a Baroque influence) are owed to some Italian masters. Two of them signed and dated their work (1894) on the tambour of the staircase chandelier, their names being thus kept for posterity: Elia and Giaccomo of Friuli, Udine. The two-winged rail of the stairs leading from the ground floor to the first floor is made of ironwork bearing the motif of the French Renaissance rinceau. The stairs are marked, on either side, by two (of the initial four) bronze sculptures, which also provide the lighting. They are feminine representations, possible allegories of the hours, belonging to the great French sculptor Albert-Ernest Carrier-Belleuse. An important skylight provides spectacular visibility for the upstairs lobby. The ceilings of the latter, as well as those above the staircase are painted with garlands and medallions depicting Roman deities.

The palace has kept its original stoves, with Bohemian tiles, the most important of which is the monumental fireplace built on two levels, made of Meissen faience, with a painted medallion showing a castle on the Rhine.

The building has undergone various transformations along time, on the one hand, and, on the other, the earthquakes of the 20th century affected its strength structure, which called for laborious consolidation and restoration work on the interior and exterior decoration. The latest and most important restoration project was achieved in 2006. 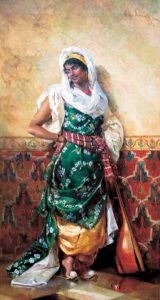 The Museum’s patrimony consists mainly of modern and contemporary Romanian art (19th and 20th centuries) and is structured into collections: painting, graphics, sculpture and decorative art.

The painting collection started in 1931, becoming enriched, along the years, by means of acquisitions and donations (among which the most important one is the Seulescu-Stere Donation). It offers an ample and significant perspective over the evolution of the European genre, styles and influences on the Romanian easel painting during the past two centuries. Almost none of the important authors are missing, from the anonymous painters of the early 19th century to the latest generations of the 20th century.

Nicolae Grigorescu (1838-1907) is also well represented in the museum’s collection. Peasant Girl’s Head – a delicate approach with Impressionistic notes, as well as Seascape, with a motif specific of northern France, stand out among his works.

Ion Andreescu (1850-1882) is present with such works as Fair in Buzau, The Geranium Flowerpot, Village Outskirts and others.

Ştefan Luchian (1868-1916) is represented by a Self-portrait of his early years, datable 1899 and painted in Paris, but also by landscapes from Brebu, among which The Green Grove of 1912. 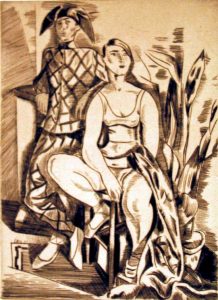 Another well represented field in the collections of the Art Museum of Ploiesti City, with works belonging to the 19th and 20th centuries, is the graphic arts genre.

Among the areas of interest in the easel graphic arts collection are the 20 drawings on tracing paper, with Dobrudjan motifs, signed by Nicolae Tonitza, originating in Eugenia Iftode’s workshop. There are also numerous drawings and sketches signed by Jean Al. Steriadi, many of them portraying some of his contemporaries, such as the painters Nicolae Dărăscu and Iosif Iser. There are also drawings in water colour, owed to Theodor Pallady, coming from the Yvonne Dinopol, Balcica and Octav Măciucă Collections, as well as satirical graphics and various compositions by Iosif Iser, coming from the Elisabeta and Mişu Weinberg Donation. There are also gouaches signed by Lucian Grigorescu (1894-1956), Corneliu Baba and many others.

Engraving and multiplication graphic arts are generally well represented, in their turn, from 19th century engravings belonging to Theodor Aman, to contemporary engravings of authors in the country and abroad. As a result of the organization, after 1990, of the “Iosif Iser” International Contemporary Engraving Biennial Exhibition, the Art Museum of Ploiesti City has enriched its patrimony with hundreds of works illustrating all of the older or newer engraving techniques, representing, through their authors, all the five continents, thus being able to offer a comprehensive image of international contemporary engraving. 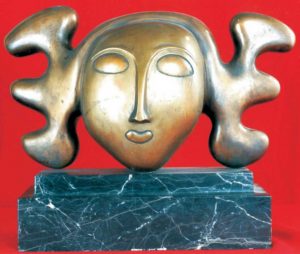